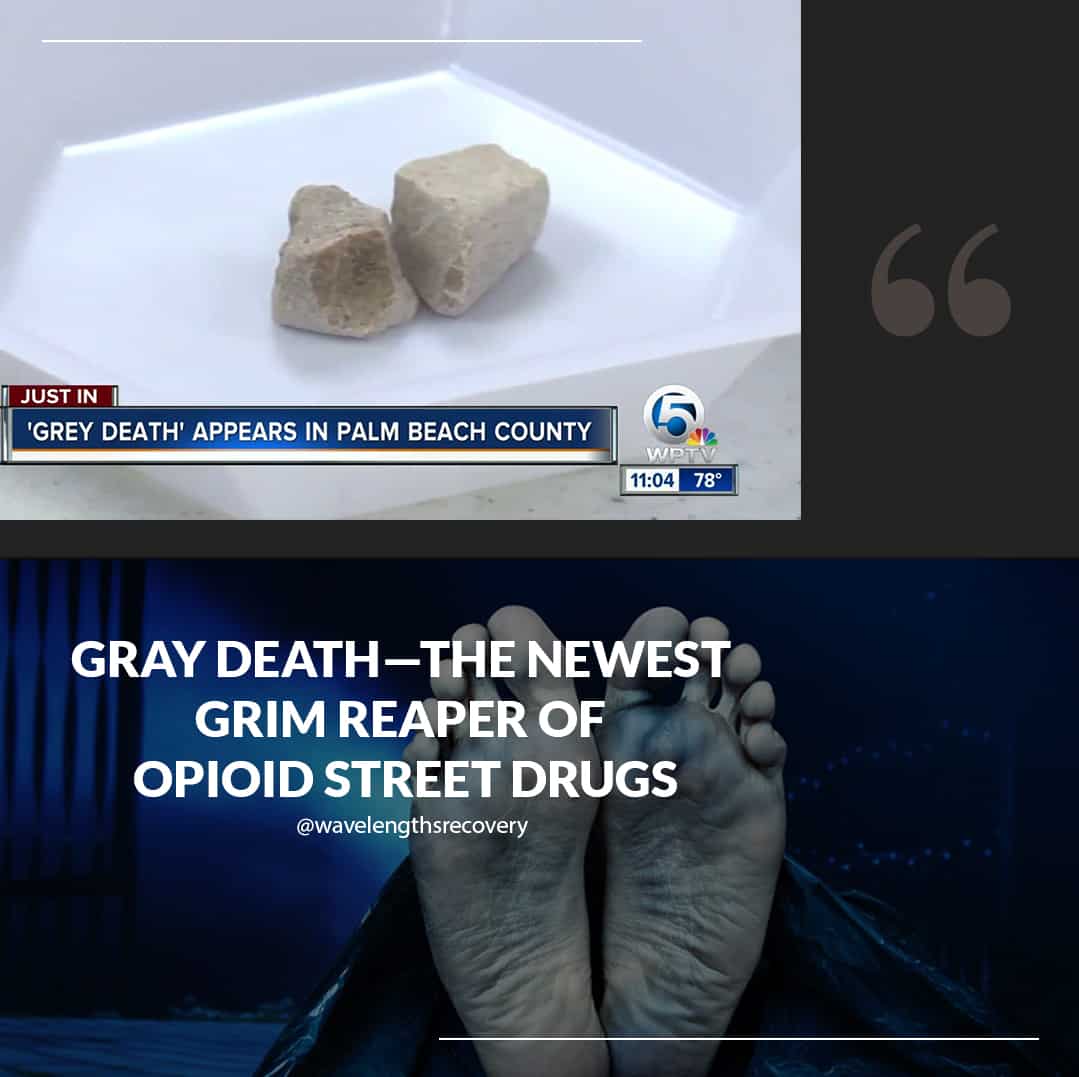 It looks like a chunk of concrete. It has a gray colorization, and it can kill with one dose. And an ominous name as well — Gray Death. What is this latest drug to hit the streets?  Gray Death is the latest killer drug cocktail that is making headlines in the ongoing war against the national opioid crisis.

What is Gray Death?

Start with heroin. Mix in the powerful painkiller fentanyl, which has 50 times more punch. Add a dash of carfentanil, which is an animal tranquilizer 100 times more powerful than fentanyl and made to be used on tigers and elephants. Some say this is even 10,000 times stronger than morphine.  Now top it all off with a synthetic opioid called U-47700, better known on the street as “Pink” or “U4.”  When it is added all together to become Gray Death, it creates as lethal a combo as any out there.  “When I hear about something new like Grey Death, my first thought is, ‘Is there some novel compound we haven’t discovered yet?'” said Donna Lula, director of forensic chemistry at Cayman Chemical, a biotechnology company that works with federal and state crime labs to identify unknown street drugs.

“Because lab tests may pick up only one ingredient, like heroin or fentanyl, there may be other overdoses from grey death that we don’t know about”, Deneen Kilcrease, a forensic chemist with the crime lab of the Georgia Bureau of Investigation, said. There is simply no way of knowing for sure.

The Most Frightening Detail

What makes the most frightening detail of Gray Death so real is this:  the one way out of overdosing with heroin, Narcan, has little to no effect on it.  Narcan, which has saved countless lives from an early death Narcan is now used by all emergency, police, and medical support personnel regularly to help overdoses they encounter daily. Gray Death has nothing to help a person taking it from overdosing. You can buy one of these gray cocktails on the street for $10-$20 and lose your life in a matter of seconds. Even touching this gray concrete rock too long is potentially deadly. This drug is so unusual and difficult to analyze and combat. “To this date, I have no idea what makes it gray,” said Deneen Kilcrease.  And because of the varying mixes of the various ingredients, you never will know exactly what you are taking. Hence the overdose issue.

Dr. Kenneth Katz, a medical toxicologist at Lehigh Valley Hospital in Pennsylvania, has shared that Gray Death is poised to take the country’s opioid crisis to a new level.  And this creates a great deal of pessimism in the law enforcement community.  No matter how many arrests are made, the supply and demand on the streets continue. At this moment, it has been limited to the upper Eastern states. This will not last long. The deadly cocktails of heroin, fentanyl, various fentanyl-class substances, along with combinations of other controlled substances of varying potencies including cocaine, methamphetamine, and THC, Tetrahydrocannabinol, which is the chemical compound in marijuana produces the high. Investigators have found such a variety of opioids in grey death samples: designer drug U-47700, heroin, fentanyl, and fentanyl-like molecules. Because each drug is present in such low concentrations, some of them may not show up on tests, Kilcrease said.

“You can throw anything in a baggie and call it ‘Grey Death,’ ” Lula said. “It’s going to constantly vary, and it’s going to keep the chemists and the medical examiners on their toes. These chemicals are all very potent and very deadly in isolation but in the wrong hands … that’s a fast-track route to the morgue.”

Being aware is huge in seeing this move across the country, but without making changes, the Grim Reaper will once again win out in the war on drugs with this new and deadly mixture of drugs.